Ancient Greeks are on the move! Classics in Communities has teamed-up with the Panoply Vase Animation Project and their animator Steve Simons thanks to an award from the Oxford University Knowledge Exchange fund to bring painted scenes on ancient Greek pottery to life.

The pictures decorating this 2500-year-old cup have been animated, revealing a snap-shot of ancient life at a symposion (pl. symposia), or drinks party ('symposium' in Latin), with scenes of drinking, chatting, and playing music and games.

The animation is freely available online for anyone to enjoy and school teachers and lecturers teaching ancient Greek topics are welcome to use it as a learning resource. A series of classroom worksheets are available for download below.

At symposia, groups of adult citizens gathered to enjoy each other’s company or to celebrate special occasions. Non-citizen men, and women who were professional entertainers or companions, might also attend. Guests usually reclined on couches facing towards each other and used a range of vases to mix, serve, and drink watered wine. The guests might have had dinner together beforehand. A symposiarch, or symposium leader, presided over the evening, pouring offerings for Dionysus, regulating the drinking, and managing the activities. It was their responsibility to set the tone of the evening and, in theory, to see that everyone behaved properly.

Like many things in ancient Greek culture, symposia had a competitive aspect. Many of the evening’s activities would be arranged as competitions, whether it was debating, telling jokes and riddles, performing music, or playing games. This animation depicts a popular game called kottabos, in which people competed in flinging the sediment (lees) from their wine-cup at a target. 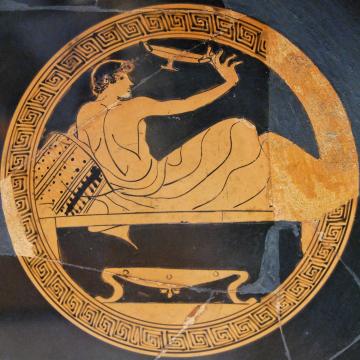 Tondo of an Attic red-figure kylix (480-460 BC) depicting a young man playing kottabos. From Chiusi, Italy and currently in the Museo Archeologico Regionale at Palermo [NI 2093].

The cup featured in The Symposion is an Athenian black-figure footed cup (kylix) made c. 500 BC, currently in the Ashmolean Museum of the University of Oxford [AN1974.344]. Such cups were used at Ancient Greek ancient drinking parties.

More information can be found on the Panoply Vase Animation Project website www.panoply.org.uk/the-symposium.html

On Symposiums and Vases: A Panoply Interview marking the creation of The Symposion with Prof Sir John Boardman (Senior Research Associate at the Classical Art Research Centre in Oxford and Emeritus Lincoln Professor of Classical Archaeology and Art).

The Symposion Drawing Worksheet has a blank space for symposion guests and a blank space in the middle for a new gorgon face [Suitable for KS 2-3].

The Symposion Storyboard Sheet can be used to challenge your pupils to plan a new animation based on this vase [Suitable for KS 3-5]. The Storyboard Terminology Sheet may be useful to help.